Muri puliti, popoli mutiÂ (â€śclean walls, dumb peopleâ€ť) is a famous saying that has accompanied Romeâ€™s long social and political history, extending beyond the walls of the beautiful capital to encapsulate a trend common to the entire Italian peninsula: graffiti.

The history of graffiti, or generally-speaking writing on walls, is not rooted in modern times.Â  Furthermore, the spontaneous practice of wall graffiti provides clear evidence of a populationâ€™s need to make openly make social commentary and explain concepts.Â  Italians call itÂ scrittura di strada e di piazzaÂ (“street and piazza writing”), a means of communication, engaged in by various members of society from different social strata, that is equivalent and parallel to official and institutional forms.

Image from Wikipedia: Sack of Rome of 1527 by Johannes Lingelbach 17th century

Today, Rome still has many examples of ancient graffiti. Â Â They can be found in many of the most popular year-round tourist destinations, such as the Baths of Caracalla and the Vatican.Â  One of the most famous graffiti does not belong to ancient Rome, but to May 6 1527, which would come to be known as the Sack of Rome.Â  Rome, being the heart of the Papal States, was governed by Pope Clement VII, who bore witness to the invasion and plundering of Rome by 34,000 mutinous troops under the command of Charles V, Holy Roman Emperor.

The morning of the invasion, the Landsknecht army forcibly entered the Palace Armellini through the window of a cellar, and then made their way to the Palazzo della Rovere and then onward to St. Peterâ€™s, where the Pope was praying and being guarded by 189 Swiss Guards, who defended his escape through the Castel Santâ€™Angelo.Â Â  After that, the Landsknecht army crossed the Ponte Santâ€™Angelo and invaded the rest of the city. 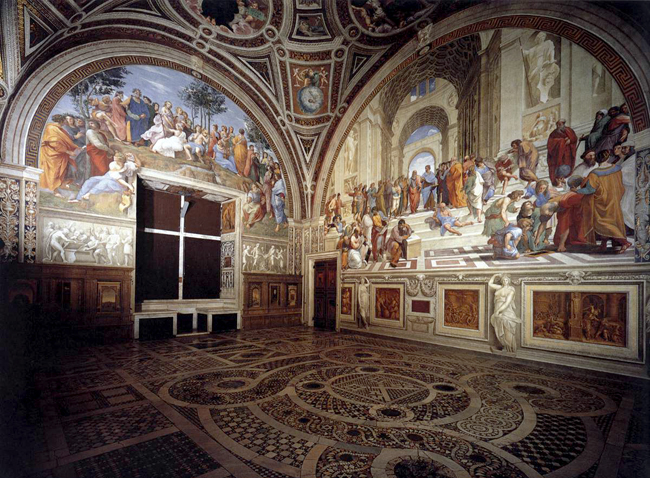 There were many acts of vandalism on that ominous day in Roman history, from historic relics, such as the Veil of Veronica, to structures, such as one of the Vatican Museumâ€™s Raphael Rooms, the Room of Signatures, where the famous fresco Disputation over the most Â Holy Sacrament can be seen.Â  It is also at the bottom of this masterpiece that the invaders carved the word â€śLutherâ€ť (still visible today, under direct light), a tribute to Martin Luther, an enemy of the Roman Church of the early 1500s.

Romeâ€™s ancient history can be seen as the symbolic crossroads of â€śhuman experiences.â€ťÂ  From political satire to provocative thoughts on freedom, the graffiti of the thousand or more walls of Rome, and around Italy, speak of a culture that has been handed down generation after generation, and from city to city.Â  Some may even say, from wall to wall.

So, do not be surprised if you find graffiti during your next passeggiataÂ through the many alleyways of the Eternal City.Â  Be they words of love or protest, Romeâ€™s graffiti offers you tributes of bygone and modern times, of voices that still echo in the market of Campo deâ€™ Fiori, out of the many windows of the charming Piazza Navona, and along the stairs of the Spanish Steps.

Gelato. Â  It’s the one Italian word I made sure I knew how to pronounce properly before my first visit to Rome. When I arrived I chucked my suitcase...

Last fall, we featured one of our tour locations as a blog post: the Baths of Caracalla. Â Perhaps not has popular as the Colosseum, Roman Forum or Vatican,...