Located just a stone’s throw from Campo de’ Fiori, adjacent to Via dei Baullari, Via del Pellegrino is a quaint pathway that clearly harkens back to a Roman past that was filled with many artisan shops owned by glassblowers, potters, artists, and a host of other selling whatever wares they could (a.k.a junk shops).  It’s the type of street about which songs are written and where film location scouts can find an authentic setting.

Originally, the street was called Via Florea and then after Via degli Orefici (The Jewelers’ Way, so named because of the numerous goldsmith shops on the street).  In the 15th century, the street was briefly named Merzariorum, probably in reference to the Lex mercatoria that was granted by the Gardinal Riario, which allowed for more freedom in commercial transactions.  Thus, it is understandable that the street has a dense presence of shops.

Image from Romeing. Click to visit their article on Via del Pellegrino.

This narrow and cobbled street, surrounded by impressive 18th century architecture and the Renaissance Revival architecture of the Palazzo della Cancelleria, however, had its name changed once again to its present-day name Via del Pellegrino.  Many derive this latest (and final) name change from a tavern (often called the “Gabella Wine”), dating back to the pontificates of Paul II and Sixtus IV in the 15th century, that disrupted the packed array of artisanal workshops and served the many who frequented the street.  More specific to the name “Pellegrino” is the fact that this route took travelers from Campo de’ Fiori to St. Peter’s Basilica, and was most often used by pilgrims. 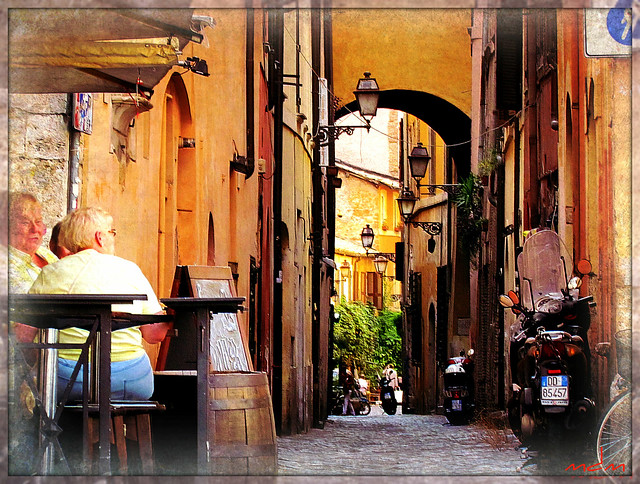 Via del Pellegrino. Image by demima on Flickr.Click to visit photographer’s profile.

In 1887 the conditions of the street were deplorable, and Filippo Pacelli (father of future Pope pius XII) warned that Via del Pellegrino was in need of regulation.  However, it was only in 1939 that the street’s commercial activity was regulated, and many of the shack-like structures that had been constructed by shopkeepers were removed due to serious concerns for public hygiene and safety.

As for today, the street continues to keep intact the roots of its secular history.  Pilgrims and tourists stroll this quaint and captivating path 365 days per year, and artisanal workshops that have been handed down generation after generation continue doing their trade.  Of the many shops to be found on Via del Pellegrino, the Libreria del Viaggiatore (Traveler’s Bookstore) is one of particular note.

Still keeping traditional Italian business hours (observed siesta 2:00 pm-4:00 pm), this widely respected bookstore was opened by Signor Bruno in 1991.  Bruno’s aim was “to create a space that would make it evident that books can open every door”, and considering its proximity to the statue of Giordano Bruno (erected in 1889 by Ettore Ferrari) that commemorates free and progressive thinking.


Last February 2014, Signor Bruno died, and with his death the bookstore underwent a period of temporary closure.  No longer housed at Via del Pellegrino 78, the bookstore can be found just a bit further down at 165.  Having joined forces with The Round Robin, a small publishing house, the Libreria del Viaggiatore continues on as a self-managed and unique entity that transcends the simple rationale of the market to serve the interests of the people.

Image from the Libreria del Viaggiatore. Click to visit their FB page.