Off the Beaten Path: The Protestant Cemetery (Cimitero Acattolico)

Following up on our previous post on Testaccio is this post on the Non-Catholic Cemetery (Cimitero Acattolico), better known as the Protestant Cemetery, located on Via Caio Cestio, just off of Via Marmorata in Testaccio.   END_OF_DOCUMENT_TOKEN_TO_BE_REPLACED

Il Mercatino Giapponese in Rome: Should You Go? We'll Let You Know.

If you take either the metro line A or B to Termini, then grab the 105 bus in the direction of Grotte Celoni or the tram line FC1, you will be able to arrive at the Mercatino Giapponese . (To plan your trip visit Rome’s transportation Pages: ATAC or MuoversiaRoma)

END_OF_DOCUMENT_TOKEN_TO_BE_REPLACED

With each successive generation, there is a perceptible shift and perhaps distortion from the classic understanding of tourism.  Until a few decades ago, traveling meant settling on one major destination with all its bells and whistles.  This was, for a variety of reasons, in contrast to the prevalence of today’s do-it-yourself planning and the popularization of backpacking to contain costs and expand options for where to go and how much to see.

END_OF_DOCUMENT_TOKEN_TO_BE_REPLACED

Off the Beaten Path: 4 Museums in Rome You Should Know

Without a doubt, the city of Rome is a living museum, welcoming all to gaze upon the architectural and artistic wonders of bygone eras. Below are four museums that take you away from the crowds and offer you another immersive experience of its history:

We Wish You A Happy Valentine's Day from Rome!

Image by Diedré Blake. Click to visit her site.

We wish you the best on this day, and hope that you spend it in the company of loved ones.

Don’t Forget to Check Out Our Valentine’s Day Post:

Visit Our Website to Find Out More About Our Latest Rome Tours!

Valentine's Day in Rome: 3 Ways to Spend It!

If the Eternal City is par excellence and your love worthy of eternal promise, then being here on February 14th will be one day in which you cannot help but to get lost in they eyes of your partner as you wander through the streets of Rome.

Image by Diedré Blake. Click to visit her site.

END_OF_DOCUMENT_TOKEN_TO_BE_REPLACED Located just a stone’s throw from Campo de’ Fiori, adjacent to Via dei Baullari, Via del Pellegrino is a quaint pathway that clearly harkens back to a Roman past that was filled with many artisan shops owned by glassblowers, potters, artists, and a host of other selling whatever wares they could (a.k.a junk shops).  It’s the type of street about which songs are written and where film location scouts can find an authentic setting. END_OF_DOCUMENT_TOKEN_TO_BE_REPLACED

The Other Roman Art: Our Top 5 Places to View Street Art [Revisited]

Leaving aside the politics of whether to call it street art or graffiti, 2014 was a great year for Rome’s alternative art scene.  And given the recent activities along Via Ostiense, 2015 should be even better. 🙂

Both Italian and international street artists have made the Eternal City their latest canvas for cultural and self-expression, and many of the city’s more residential neighborhoods.

In the recent years, websites that represent the street artist community, such as Street Art Roma, Street Art News, and 999 Contemporary Street Art, have emerged and are growing in popularity, giving new understanding to the art form by creating educational dialogue.

END_OF_DOCUMENT_TOKEN_TO_BE_REPLACED

Top 5 Reasons to Travel to Rome in the Low Season

With the holidays behind us, it’s fair to say that Rome has entered into its low season period.  Officially, the low season starts around November and lasts until March.

If you have ever visited Rome in November and December, then you already know that there is nothing low about those two months due to the winter holidays. Christmas, New Year’s, and the Epiphany all mean one thing here: lots of gift giving and celebrating with friends and family and, of course, time off from work. 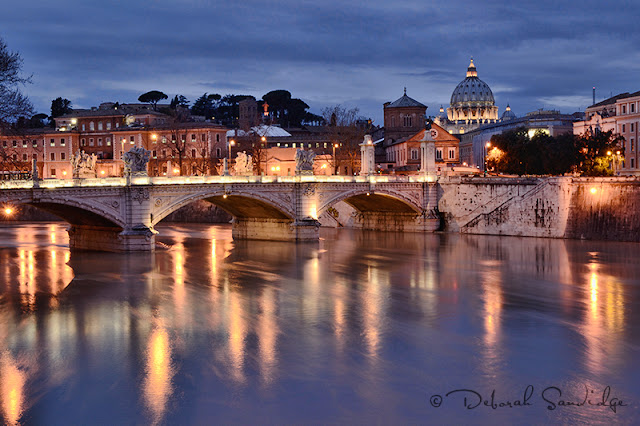 Image by Deborah Sandidge. Click image to see more of her wonderful photos of Rome.

After the first week of January, the city tends to quieten; its streets are less flooded with human and vehicular traffic, and Italian can be heard more often than not in those places usually filled with tourists–which makes it the perfect time to actually visit the city and see the sites.

END_OF_DOCUMENT_TOKEN_TO_BE_REPLACED

Our Top 3 Parks in Rome: Take A Nature Getaway

Rome is renowned for its many monuments, museums, and archaeological sites.  Rome is a city that breathes life through the presence or absence of its buildings.  Still, as amazing as the Colosseum or the Baths of Caracalla are, sometimes you just want to get away from it all.

Here are 3 natural spaces in Rome, where you can take a breather from touring the city.

(Get There: Bus 223 to Stazione La Giustiniana or Tram FC3 to Montebello)

Located in northeastern Rome,  Villa Ada is the second largest park in Rome that covers an area of 450 acres.  Known not only for its beauty, the Villa Ada is also a popular venue for many artistic and musical events.  Although a public park, Villa Ada also houses the Egyptian Embassy, and so there are some areas that are considered private and are restricted.

Originally, the Villa was the royal residence of the Italian royal House of Savoy from 1872 to 1878.  The name of the Villa stems from the brief period (1878-1904) when a Swiss count (Tellfner) named it after his wife Ada.

Curious to learn more about Villa Ada? Check out the Villa’s Google+ Page, or read some of the wonderful reviews and see more images on TripAdvisor.