Following up on our previous post, below are some ongoing events during this holiday season:

Piazza Navona is already of great historical and architectural renown, and its massive annual Christmas market adds a hefty dose of magic to this busy attraction.  On an average day, thousands of people make their way easily through the open stadium-shaped piazza.  During its Christmas market, however, the piazza is transformed into a crowded marketplace, filled with stalls selling all sorts of decorations (such as the Epiphany’s Befana dolls, shown above), foods (make sure to try a hot ciambella, shown below), jewelry, books, and a host of other things.

If you are traveling with children, or simply a child at heart, then don’t forget to take a ride on the carousel.  Also, take in the usual street performances and perhaps have a caricature done by one of the many street artists.

Also for children: just across the river, in Trastevere, the ExtraTeatro Extraordinary Theatre is back with its bilingual plays (English & Italian) for children at the Teatro Belli.  Performances are on Saturdays at 4PM and 5:30PM.  Dates: 20 & 27 Dec. 2014; 3 & 6 Jan. 2015.

Of course, the market in Piazza Navona is not the only one! Throughout the city, there are many smaller markets that you can visit: read Revealed Rome‘s “Where to Find Rome’s Christmas Market” or Welcome to Rome‘s “Christmas Markets in Rome” for some listings for this season.

Christianity, specifically Catholicism, is surely the major religion followed by residents of the Eternal City.  Judaism, however, has had a longer foothold in Rome, with a history that extends back over 2,000 years. And despite the recent anti-immigrant attacks in areas of the city, Rome has a growing and religiously diverse immigrant and tourist community.  As such, here are some events that may be of interest:

Saturday (13 Dec. 2014) at 7PM, marks the Twenty-Second Annual Vatican Christmas Concert, and it will be like no other!  Pope Francis will be welcoming the legendary “Godmother of Punk” singer-songwriter Patti Smith to perform.  Smith is not alone.  CeCe Rogers, another American musician, and the David Bratton Gospel Choir will be there, as well as performers from Italy, Switzerland and France.  Tickets range in cost from € 75 to € 250.

Can’t make this concert? Then check out the Luminari Concerts at Rome’s American Episcopal Church, St. Paul, over the next two Sundays: 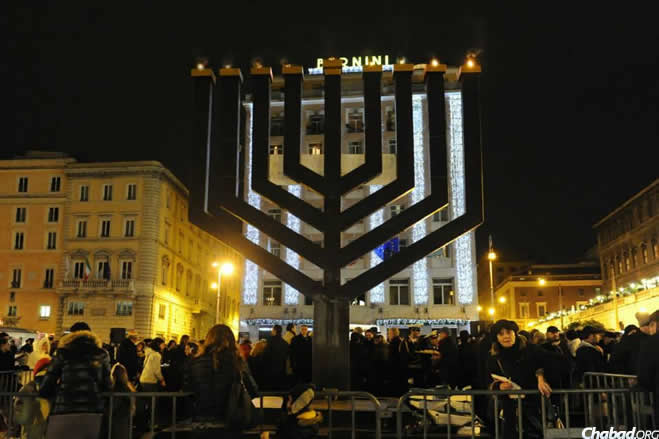 Image from Chabad: 2013 Menorah Lighting in Rome. Click on the image to see more from this event.

(Chanukah) – The principal public Menorah can be found in Piazza Barberini.  Many visitors will enjoy visiting the area known as the Jewish Ghetto, and having some carciofi alla giudía (carciofi alla giudea) or “Jewish-style artichokes.”  For other celebrations, read Italy Magazine‘s article “Hanukkah Celebrations in Italy”.  Interested in learning more about Jewish Rome? Visit Jewish Italy, and check out their local city guide to Rome. If you are not in Rome for this holiday season, try these recipes to prepare your own Jewish Italian holiday feast.

For Detailed Events Listing, Visit Wanted in Rome‘s “What’s On”